Are Snails a Threat to My Garden? 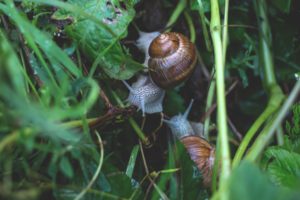 Slowly… ever so slowly, French cuisine has taken over Southern California, and I mean that literally. In 1850, some well-meaning epicureans brought the brown garden snail over from France to California as food, and now snails are one of the most bothersome pests in the region.

Life Cycle of the Snail

Most homeowners find themselves fighting these tiny creatures at one point or another. Snails don’t need other snails to reproduce, so just a single creature can populate a garden very quickly.
The life cycle of the snail is pretty straightforward. A single hermaphrodite snail lays eggs. If there is another snail around, then there might be a joining to fertilize the eggs, but if not, then no problem. A snail can self-fertilize. One way or the other, the eggs become viable and hatch out fully formed snails.
A single snail can live up to five years and lay about 500 eggs a year. Unchecked, snails can quickly overtake an area (as is the case in Southern California), causing destruction to crops and landscapes.

The problem is that snails like to eat just about anything that is part of the Plant Kingdom. There are a few species of snail that eat other snails, but the brown snail prefers your expensive landscape. These herbivorous snails devour everything: leaves, stems, bark, and fruit. They really enjoy gardens and farmers have found them to be particularly bothersome.
Even other species of snails in the area that are omnivorous (such as the cellar glass-snail) feed on beneficial earthworms. This makes them just as much a problem for farmers as the brown snail.
Snails hunt for food at night and become more active in the Fall as they prepare to hibernate. When food or water is scarce, the snail can put itself into a form of stasis which keeps them from dying. Consequently, they can survive about anything Mother Nature throws at them.

How to Get Rid of Snails

There are several different methods used by farmers and homeowners to get rid of snails. Some have proven more effective than others.

Picking off snails by hand only works if you are dealing with a few. Traps work better, but you have to rely on the snails finding their way into your snare. Copper mesh works well as a barrier. Snail slime and copper mix in a way that snails find highly unpleasant. However, copper isn’t cheap, and it doesn’t kill the snail, it only keeps them away from certain plants. So, you end up redirecting them to another part of your expensive landscape.
Birds like to munch on snails and can help keep them under control. If you have space for geese or chickens, then you might consider keeping a few to control the snail population. However, most urban areas won’t allow these birds, so it’s not likely you will draw enough wild birds to handle your snail issue.
Most people turn to professional pest control companies to handle their snail infestations. There are several options available that pose little risk to humans or pets, including iron phosphate. However, in the case of an extreme infestation, more intensive treatments might be needed to get rid of the snails.

What to Do If You See Snails in Your Yard

The best course of action is to never let the problem develop. If you see a snail in your garden, pick it off your plant and dispose of it. Remove any boards or objects near the area where the snails can hide during the day.
Monitor the situation closely, and if you see evidence of more snails, call a professional. They can assess the situation and recommend the best way to get rid of snails before they destroy your vegetation.

The Truth About Cockroaches and Asthma

The Truth About Cockroaches and Asthma hen people hear the word “cockroach” it's most definitely connected to an...
Read More

Do DIY Pest Sprays Work? IY pest control products are cheap and easy to find at local stores and online. While they have...
Read More

hile pest control is important in your home, garden, and lawn, it is also important that it is approached in the correct...
Read More