How to Get Rid of Bees and Beehives 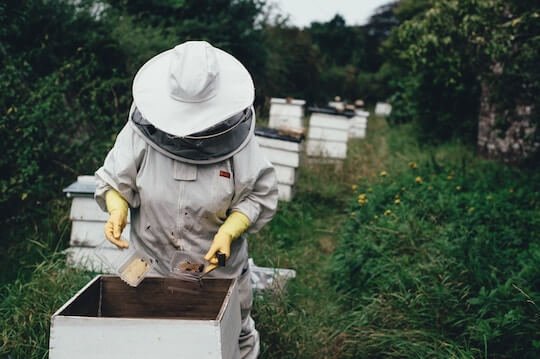 How to Get Rid of Bees and Beehives

Normally, humans and bees can share the outdoor world. Most people suffer through a sting or two at some point during their life, but unless you are allergic to them, bee stings do just that – they sting. Most bees tend to ignore the people around them unless they feel threatened.

While it’s easy to brush off one or two stings, several hundred can kill you. Small children and pets are particularly vulnerable when attacked by a large number of bees. Their small bodies just can’t handle the amount of toxin that hundreds of bees can inject.

There are over ten thousand species of bees in the world. The majority of them live in communal colonies that revolve around a Queen Bee. She lays the eggs, and the rest perform all the other jobs inside the colony. Except for a few drones the Queen keeps on hand for mating purposes, all bees are female

When the colony becomes too large to support itself, the Queen breeds new Queens, and the colony splits. This new queen leaves with a band of followers and swarms to a new location. You can often see these swarms in trees or on the eaves of a house. If you are lucky, you can catch the bees before they begin building their hive.

Since most people don’t own beekeeper suits, it is best to call a professional. They can capture the swarm and move it to a secure location. This protects the bees, which we need to pollinate crops and keeps them from damaging your home.

How to Identify Trouble Spots in Your Home

For the most part, honeybees are going to be your greatest concern. Bumblebees and Yellow Jackets only live long enough to establish the next year’s population. If they do set up residence near your home, you can remove the nest at the end of the summer and watch to make sure it does not reestablish during the next year.

However, honeybees start building combs. Their hive is a more permanent structure and can cause serious damage to your home apart from the danger of stings. Often they find their way in through cracks in the eaves. If you see bees in your yard, watch their flight pattern. Once you pinpoint where they are coming from, call a professional to come and evaluate the problem. Pay particular attention to trees and rooflines.  A bee is small and can enter a space through a very small hole

How to Prevent New Infestations

The honeybee’s sense of smell is acute. The residual traces of beeswax often draw new swarms. It is extremely important that you remove as much of the old hive as possible. Then, you need to caulk or barricade the area where the hive was located. Watch the spot diligently for evidence of any new swarms.

We want to give you one last word of caution regarding swarming bees. Never go near a swarm unless you are fully protected. California has colonies of Africanized bees which can kill. This highly aggressive species does not avoid contact with people. Instead, they will zero in on a threat and can chase a person down. Always call a professional when you see a swarm. They can identify the kind of bee involved and determine the best method of removal.