How to Keep Coyotes Away 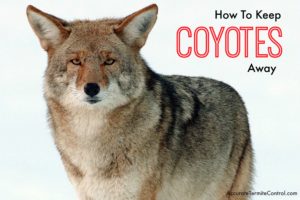 Coyotes straying into suburban and urban areas are becoming an increasing issue in Southern California, and residents have been worrying as they have become increasingly bold, aggressive and less intimidated by humans.

In the past 12 to 24 months, there has been a huge spike of coyote-to- human encounters, as well as the increase of the number of attacks on pets, according to the OC Register.

Since September of 2015, the pet death toll in Orange County – with increased incidences in Seal Beach, Newport Beach and Huntington Beach—197 pets have been harmed or killed by coyotes.

Researchers say that these wild canine breeds are not only becoming an increasing danger to cats and dogs, but to humans as well. Niamh Quinn – a human-wildlife interactions researcher from the University of California—has found that there have been more human bites from coyotes in the last year than in the past several years behind. She has found that the coyotes aren’t leaving anytime soon and that the reason for this coyote invasion is that humans are either—directly or indirectly—providing them with food, such as with unsecured garbage containers or leaving food outdoors for feral pets.

In light of this news, there are many things you can do to protect yourself, your pets and your property from coyotes. Make sure to implement the following steps to keep coyotes away from your home. For any concerns or questions, you may also want to contact your city or county’s animal control or wildlife departments.

1. Fence off areas where you keep animals.

If possible, keep them in a fully-enclosed compound, especially livestock and small animals. If they are indoor pets, you may want to make sure they aren’t allowed to go outside after hours (especially during the early hours of the morning or as soon as dusk hits) unless under your supervision and near you at all times. When choosing the enclosure or fence, remember that coyotes can jump over anything that’s less than six feet tall, so choose wisely and be sure to fit the fence tops with a deterrent on the top for added protection.

Eliminate potential hiding spots and shelter for these predators (and their prey – such as rabbits, squirrels, and other rodents, which would also act as an attractant to coyotes) by making sure you keep shrubs, bushes, weeds, woodpiles or trees either to a minimum or well-trimmed. Coyotes have been known to “case the joint” when stalking their prey.

This includes making sure your garbage is concealed and intact (especially meat and dairy sources) and if possible to make sure that you feed your pets indoors. Eliminating any fallen fruit or standing water are good ideas for discouraging coyotes from sniffing around. Do not leave pet food outside and do not feed any coyotes or other wildlife. For pets that do eat outside, keep in mind to bring any leftovers inside as soon as the pet has finished.

A sudden light, noise or spray of water can startle and scare off coyotes that stray onto your property. If you want to get really serious about coyote control, you may want to consider a Coyote-Deterring sound system that replicates cougar sounds, a natural enemy of coyotes.

termite inspection is essential for homeowners because it can alert you to structural damage in a home due to a termite...
Read More

Is a Scorpion Sting Deadly?

corpions make a lot of people think of Westerns. Some cowboy is riding a horse in the desert and they cut to a single...
Read More

Termites are House Cancer ust as your body depends on a skeletal system to keep it upright and healthy, your house also...
Read More

Gnat Swarms, King of Pesky Pests warming gnats will not bite you, but they are one of the most intolerable things when you...
Read More