How to Get Rid of Stink Bugs

People often stay as far away from stink bugs as they possibly can to avoid setting them off, which is a smart thing to do, but how can you get rid of them? According to pestworld.org, stink bugs get their name from the unpleasant odor they produce when they are threatened, which helps protect them. The smell comes from a chemical found in their abdomen, and some can even spray this chemical several inches out of their body. 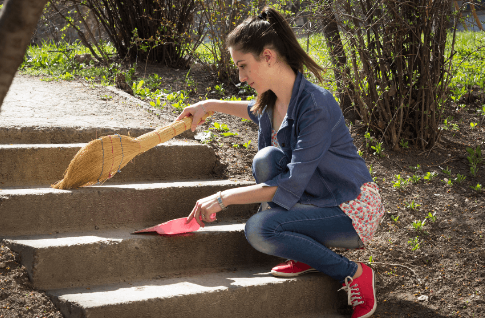 The best thing to do to avoid having the smell of stink bug in your home is to remove the bug without squashing it. For example, you can vacuum the bug; make sure to use a vacuum with bags and dispose of the bag after you finish sucking up the bugs, otherwise the smell can remain in the vacuum for a while. Another way to get rid of stink bugs is by using household chemicals. According to wikihow.com you can fill a large bowl with dish detergent until it coats the bottom of the bowl then fill the bowl with water about half way, stir until well mixed. Next, knock the bug into the bowl with a popsicle stick or long object (you’ll have to move quickly here); once the bug is in the solution, mix the stink bugs in the solution with the popsicle stick. The stink bugs should drown within 20 to 40 seconds. According to wikihow.com the bugs breathe through pores beneath their waxy exterior shells, and when soap plugs these pores up, the bugs suffocate.

Stink bugs often live on and feed on plants outside the home, but during the summer and fall, they try to enter homes and other buildings to spend the winter in a warm dwelling, informs pestworld.org. Once the bug enters the home or building it is very difficult to get rid of because they reproduce so quickly. According to Penn State University, a female adult stink bug lays 20 to 30 eggs at a time and they hatch four to five days later. They undergo a series of molts and become adults within two to three months. Stink bugs are also difficult to remove after entering a home because dealing with a large number of stink bugs at a time can be quite a challenge. The bugs move inside the home through cracks and other openings. They like to spend their winter hiding inside the walls or in the attic. During the spring these pesky bugs become active and usually gather on walls and windows to find their way out of the home to find food. If you notice an infestation of stink bugs within your home, please call our professionals at Accurate Termite and Pest Control. We have the proper equipment to rid your home of these stinky pests.

Are Snails a Threat to My Garden?

Slowly… ever so slowly, French cuisine has taken over Southern California, and I mean that literally. In 1850, some well-meaning epicureans...
Read More

The question is not ‘are you surrounded by poisonous arachnids’ because at ground level, the answer is very likely ‘YEPPERS’.

The question is, ‘should you panic?’ And if so, ‘what kind of 5-year-old-at-Candy-Store-Black-Friday -Sale panic level should you set your freak-out meter to?’

How to Keep Pests Away from your Garden

rying to grow a garden can be incredibly difficult. There are an array of insects and other pests that infiltrate and...
Read More