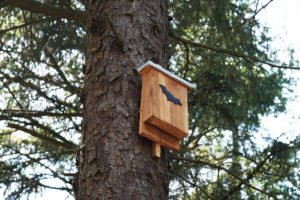 Bats are nocturnal creatures that eat up to 1000 mosquitoes in an hour, making them a homeowner’s friend. However, bats can become problematic if they find their way into your home. They like to build colonies, leaving behind smelly droppings. In fact, the weight of their droppings can cause the ceiling below their roost to collapse. Repairs are especially tricky when their droppings corrode wood or metal.

Bat control is a complicated business because often it is hard to pinpoint the location of the roost or figure out how bats are entering the house or building. Bats are also hard to trap by hand because they fly. So, rather than remove your bats, entice them away by building a bat house.

After suspicions arise that there may be bats in a home or building, it’s essential first to perform a bat inspection to determine the entry point or points. Bats enter homes and buildings through cracks, holes, and other open spaces at least ⅜ inches thick. Bat droppings give good indications of where the entry point is because it is unlikely that large amounts of bat guano accumulated from the flight of the bat. Instead, it builds up where the bats live.

Common entry points are roofs, vents, and gables. If all else fails, inspect attics and chimneys for bat droppings to find any indication of where they may be roosting.

Bats like small spaces and they typically live in between the bark of a tree and the trunk. The idea is to build something that mimics where a bat would usually live in nature, giving the bats an alternative to roosting in an attic or chimney. When mounted on the side of a building, it retains more heat, which protects their young, and keeping the bats close will also control the mosquito population, which is excellent for those summer nights outside. A single bat house can accommodate up to fifty bats.

It doesn’t take a handyman to build a bat house, nor does it require a lot of materials. You can find detailed instructions from the National Wildlife Federation. Just make sure that it is dark and sealed with caulk to keep in heat and keep out the rain. The idea is to mimic the space between the bark of a tree and the trunk, where bats normally roost.

So, why don’t bats stay in the trees? They have moved out of the tree because of the number of larger trees available shrinks each year. Most of the trees in a suburb get cut down during the building process and newer trees do not have the niches that bats like to hide in.

Erect your bat house BEFORE you have a bat infestation. Relocating bats is difficult once they have established a colony.

Bats have an essential place in the food chain because they help with insect control. Removal by extermination should be a last resort. For those with bat problems in southern California, call Accurate Pest Control. We can help you remove bats that have gotten into your home.

We continue to be Southern California’s preferred termite and pest control service, provider.

termite inspection is essential for homeowners because it can alert you to structural damage in a home due to a termite...
Read More

Who Pays For Termite Treatment

ou found your dream home, but during your inspection, they find termite damage. Who Pays For Termite Treatment? Does that...
Read More

Home Habits We've Dropped since Being Stuck inside during the Pandemic  he COVID19 pandemic has changed the way we...
Read More