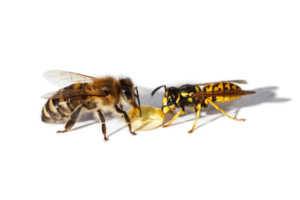 It’s no doubt, bees and wasps are beneficial: they pollinate plants and limit harmful insects, but they can also be a threat to humans. Studies show that 50-100 people die from bee and wasp stings each year. Humans that are allergic to their venom can die within one hour after being stung. About 1 percent of the population in the world is allergic to this venom. Taking the proper precautions can decrease the chances of getting stung. First, avoiding bright colors in clothing and flowery perfume fragrances can actually deter a bee or wasp from coming too close. Second, put away sweet food. Bees and wasps are attracted to sweet food. Also, knowing how to identify them can help you avoid them.

The biggest difference between bees and wasps is the shape of their bodies. A wasp’s abdomen narrows toward the middle of the body where it attaches to the thorax or rear of the body. A bee does not have this narrowing in the middle of the body. In addition, wasps can sting several times and not die. Some bee species can also sting without dying, but the honeybee can only sting once, as its stinger is dislodged from the body. Depending on the species, bees and wasps can range from a half inch to an inch and a half in length. The most common bees here in Southern California are the honey bees (which are hairy and honey brown in color) and the bumble bee (which is fuzzy with yellow and black stripes). The most common wasps are the mud dauber (with yellow stripes along its body), the paper wasp (brown, with orange or yellow markings), and the yellow jacket (with a yellow and black striped body). If you have a bee or wasp infestation the best thing to do is to call a professional. Fighting these insects on your own can be ineffective and dangerous. Don’t hesitate to call Accurate Termite Pest Control for proper removal of any bee or wasp colony.