Are pigeons a threat? 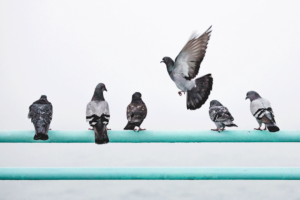 It’s not common to think of birds as pests. After all, people don’t react the same way when they see a rat as when they see a bird. Yes, birds are usually pleasant and nice to have around. But there is always an exception to the rule, the pigeon being the case in point. Pigeons are one of the most common birds found in man-made areas. They prefer roosting and nesting in a building over a tree. This is because their ancestors were domesticated European homing pigeons, according to birdbusters.com. Also, Wikipedia informs us that pigeons were originally domesticated from the rock dove, which naturally inhabits sea cliffs and mountains. Pigeons find building ledges as a great substitute for a sea cliff; and therefore feel at ease making their home in buildings and structures among humans.

At first sight, pigeons seem harmless, but they actually pose various threats. First, pigeon droppings devalue buildings and structures and cause damage over time. Furthermore, experts point out that pigeon feces are known to cause slips and falls among humans, creating a liability for building owners. More importantly, pestworld.org and birdbusters.com point out that pigeon feces have bacteria that can cause diseases such as cryptococcosis, toxoplasmosis, salmonella, and histoplasmosis; among others. Finally, pigeons are hosts to smaller pests that can invade your home or building, such as fleas, mites, ticks and lice. Clearly, having pigeons roost or nest on your home or building is cause for concern.

The best course of action, as always is prevention. Pigeons are known to invade rooftop air conditioning units, building ledges and window sills. Devices can be installed to prevent pigeons form landing and roosting. However, if you already have a pigeon problem, leave it in the hands of Accurate Termite and Pest Control. We are here to help!

How to Keep Coyotes Away

How to Keep Coyotes Awayoyotes straying into suburban and urban areas are becoming an increasing issue in Southern California, and residents have been worrying as they have become increasingly bold, aggressive and less intimidated by humans. In the...
Read More

edbugs were the most commonly searched pests in 2015, according to the National Pest Management Association (NPMA); additionally, bed bug exterminators have nearly tripled in the past decade, according to a survey by both the NPMA and the...
Read More

Building a Bat House ats are nocturnal creatures that eat up to 1000 mosquitoes in an hour, making them a homeowner’s friend. However, bats can become problematic if they find their way into your home. They like to build colonies, leaving behind...
Read More

ealybugs are found in warmer climate; inside greenhouses, gardens, and indoor plants. According to Planet Natural, mealybugs are described as “wingless insects that often appear as white cottony masses on the leaves, stems and fruit of plants.”...
Read More

hile pest control is important in your home, garden, and lawn, it is also important that it is approached in the correct manner. A lack of research into how each type of pest interacts with the environment can lead to damaged crops, property, and...
Read More

Indian Meal Mothhe Indian Meal Moth feeds on various foods found in pantries. The caterpillar stage is a cream color, with yellow or pinkish shades and a dark brown head. The adult moth is about 3/8 of an inch long, and the body color is usually...
Read More

Why do I Have Pests if my Home is Clean?

Why do I Have Pests if my Home is Clean?e all understand that a clean home is the key to keeping your home pest-free. We know the drill of wiping down counters, sweeping, and mopping regularly so that pests aren’t attracted to the home. We are...
Read More