of all fruit, vegetable and seed crops in the U.S are indirectly pollinated by honeybees

of recorded bee species have been identified throughout the world so far.

million flowers can be pollinated by a single bee colony in a single day.

ALL ABOUT BEE REMOVAL & CONTROL 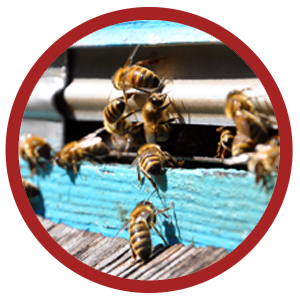 You might be surprised to know that there are more than 20,000 recorded bee species throughout the world. With that many different bee species out there, they can vary in appearance,behavior, and diet.
In our area, the bee types you are most likely to come in contact with are the Honey Bee, Bumble Bee, Carpenter Bee, and Africanized “Killer” Bee. Honey Bees are probably the most common in Southern California and are the bees you are most likely to find around your home.

Bumblebees are typically short and plump bees that you see on flowers during the summer.

Carpenter Bees set up their homes inside soft wood damaged by termites or fungus/rot and can cause property damage similar to termites.

Africanized, aka ‘Killer’, bees are present in Southern California and, as the name suggests, they do present a threat to those immediately around them. Africanized bees are a species that was cross-bred by design to withstand warm tropical climates.

They were originally brought to Brazil in the 1950s and were set free by accident. They swarmed all throughout South America and eventually arrived in the United States in the 1990’s.

These bees are by nature, highly defensive of their hives and significantly more aggressive than the other common bee species in California. Though they do resemble their European counterparts, there are some key differences that can help you differentiate Africanized bees from other bee species.

Africanized bees are usually smaller and more likely to build hives in the ground. They defend their hives with noticeable aggression and in larger numbers than other bee species.

Africanized bees are known to have a greater number of bees assigned to “guard” their hives to look for threats. Additionally, they patrol a larger radius from the hive and chase after threats much farther than other bee types up to thousands of feet in some cases.

Africanized bees can be very dangerous and if you feel there might be a hive near you, call your Accurate Termite and Pest Control bee removal professional right away. Emergency inspections and services may be available.

Bees are crucial to crops and wild plants’ growth and sustainability. We are currently experiencing a shortage of bees worldwide. Locally in California, almond growers are forced to import honey bees from other states to pollinate their crops or risk losing their $2.3-billion-a-year crops.

It is estimated that California is using about half of all the honey bees in the US. At the same time, bees do sting and present an especially precarious threat to those who are allergic, children, the elderly, and people with poor cardio pulmonary functioning.

Additionally, bees can build hives within residential structures including in wall voids, attic spaces, sub floors, vents, etc. As a hive expands, bees have been reported to destroy the moisture barrier within your walls in order to allow their hive to expand within the wall void.

The loss of moisture protection within your walls presents a structural risk to your home. Often times, hives built within walls can overheat because of little to no ventilation within the wall void causing the wax and honey present in the hive to melt and ooze out of the hive, dripping on framing wood members. If undetected and unabated, the melted honey and wax on the wood framing members can lead to mold and dry-rot within the wall voids.

We all share a responsibility in protecting our bee population. It is especially important for those of us who live in urbanized areas, where it is not feasible to allow hives to grow and flourish where they may pose a risk to those living near them, to implement responsible practices in finding the balance between protecting our homes and loved ones as well as the declining bee population.

Before using over the counter bee and wasp control products, consider consulting with an Integrated Pest Management (IPM) professional organization such as Accurate Termite and Pest Control who can help you assess the issue and provide a responsible bee control plan of action that will protect your home, family, and pets and have minimal to no adverse effect to the bee population at large.

Get a Quote for Bee Removal & Control

INSPECTION PRIOR TO BEE REMOVAL

The only way to rid your home of bees is to remove the hive entirely. For this reason, a bee inspection is based largely around being able to locate the hive and being able to assess the dimensions and characteristics of the hive.
Let your Accurate Termite and Pest Control representative know if you have located the hive yourself early in the inspection process. In many cases, you will not know exactly where the hive is located but you may notice patterns of bee activity.

Share with your technician everything you know about the bees’ behavioral patterns as that information may be useful in helping our trained technician identify guard bees that he can then trace back to the hive itself.

Depending on where the bee hive is located, access to your attic or sub-spaces may be required. If your Accurate Termite and Pest Control representative suspects the presence of a hive within wall voids, he may drill a small hole into the wall into which he will insert a laparoscopic camera to gather more information about the hive’s dimensions and characteristics.

Contact Us for more information and quotes for services. 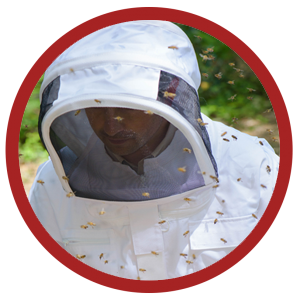 Beehives should not be disturbed without first making sure that the right equipment will be used and the person performing the control has enough experience and knowledge to control the bees without posing a risk to themselves or others.

As mentioned previously, the only way to ensure bees will stay away from your home is by removing the hive entirely. Thus, all effective bee removal programs must lead to the same end goal in mind—complete removal of the hive.

An expert bee removal plan must always be comprehensive and account for the following general steps in order to ensure it achieves the full intended result:

Accurate Termite and Pest Control’s bee specialists are experienced and licensed in both structural pest control and general contracting. Our staff can perform the work entirely from start to finish and offer the Accurate Warranty for the work completed.

While the details of each bee control and removal plan will differ, Accurate Termite and Pest Control uses sound methods that protect you and your family, and will not interfere with commercial hives and pollinators.

Please note that the use of over-the-counter products or bee control programs that merely attempt to exterminate bees without removing their hives have a high chance of adversely affecting the general bee population including commercial hives and pollinators, and have a very low chance of achieving long-term control of the hive or bee infestation.

It is not possible to prevent a bee from wandering around your property in search of nectar. If you notice bees landing on your plants and flowers the best thing to do is leave them alone.

Their presence alone is not a cause for concern. Attempting to repel them away with store-bought products can have an adverse effect on what is necessary bee activity.

In order to help prevent a swarm from building a hive within your home is to make sure that small openings, cracks, and crevices around your home are properly sealed to keep bees from wandering into your home.

However, bees are airborne insects with travel paths nearly impossible to control, and their small size helps them find small openings in your home that you may not be able to locate yourself.

The best way to prevent a significant beehive from developing in your home is by contacting a professional for bee removal at the first sight of unusual bee activity within your home.

Get a Quote for Bee Removal & Control